History Of The Church

A beautifully proportioned cruciform church, St Peter’s was largely built during the Norman period (1066-1154), but parts of the nave and north transepts are Saxon (A.D. 597-1066) in origin. The churchyard is probably older than the church itself and its semi-circular shape suggests it was once round and contained a Celtic church.

St Peter’s Saxon origins are still visible in the stonework in the west and north walls and part of the north transept, with its thin pilaster strips. The chancel is mainly c13th with the tower and south transept built a century later. Notable features are c14th tomb recesses, one allegedly for Edmund de Mortimer; and a c17th chest. Victorian developments include the windows, altar, reredos of Caen stone with beautiful painted panels and our wonderful organ, installed in 1854.

The Church is a Grade 1 Listed Building.

A fuller history of the Church can be found in Peter Klein’s booklet “A Guide to St Peter’s Church, Stanton Lacy"

The features illustrated below can be seen by walking round the church, first outside, and then inside.

Thin pilaster strips, or lesenes, are typical of Anglo-Saxon work. They can be seen on the west walls of the Nave and N Transept and on the north wall of the nave. The walls between these strips were originally covered by a layer of plaster but this had been deliberately removed by 1846. Slight differences in detail suggest that the walls were not completed all at the same time. 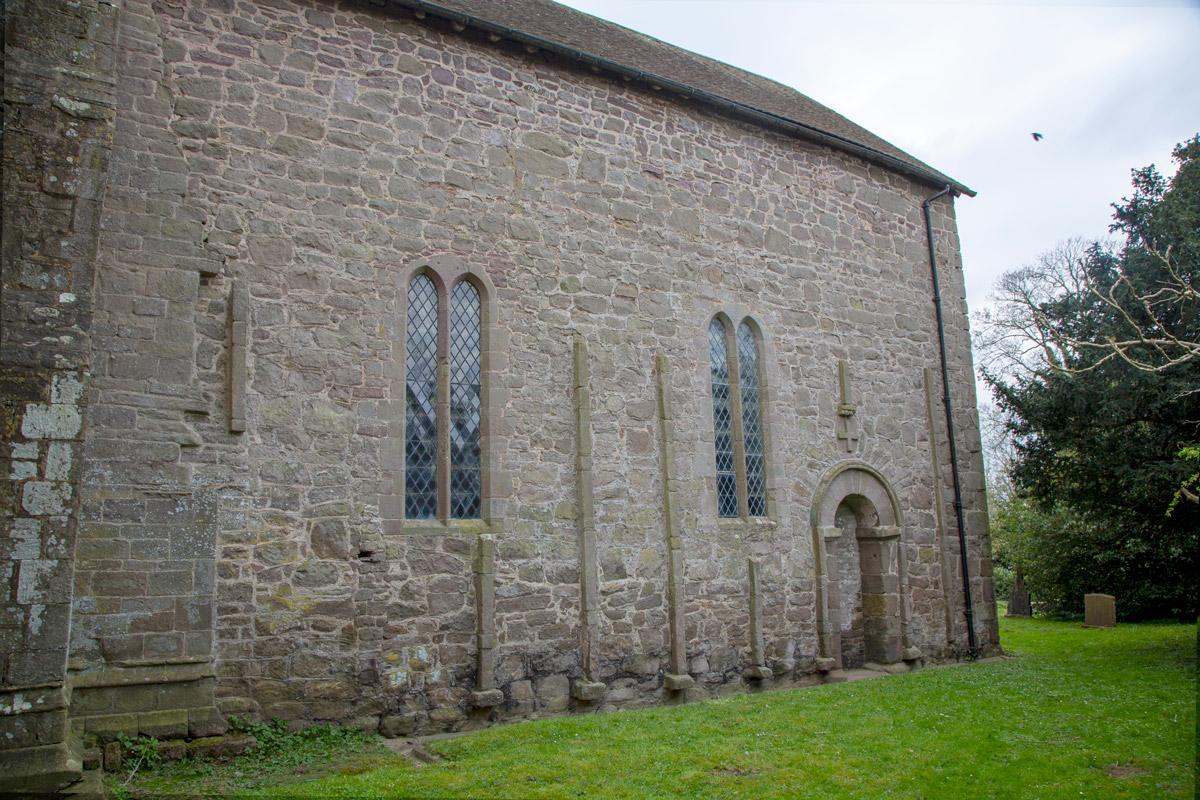 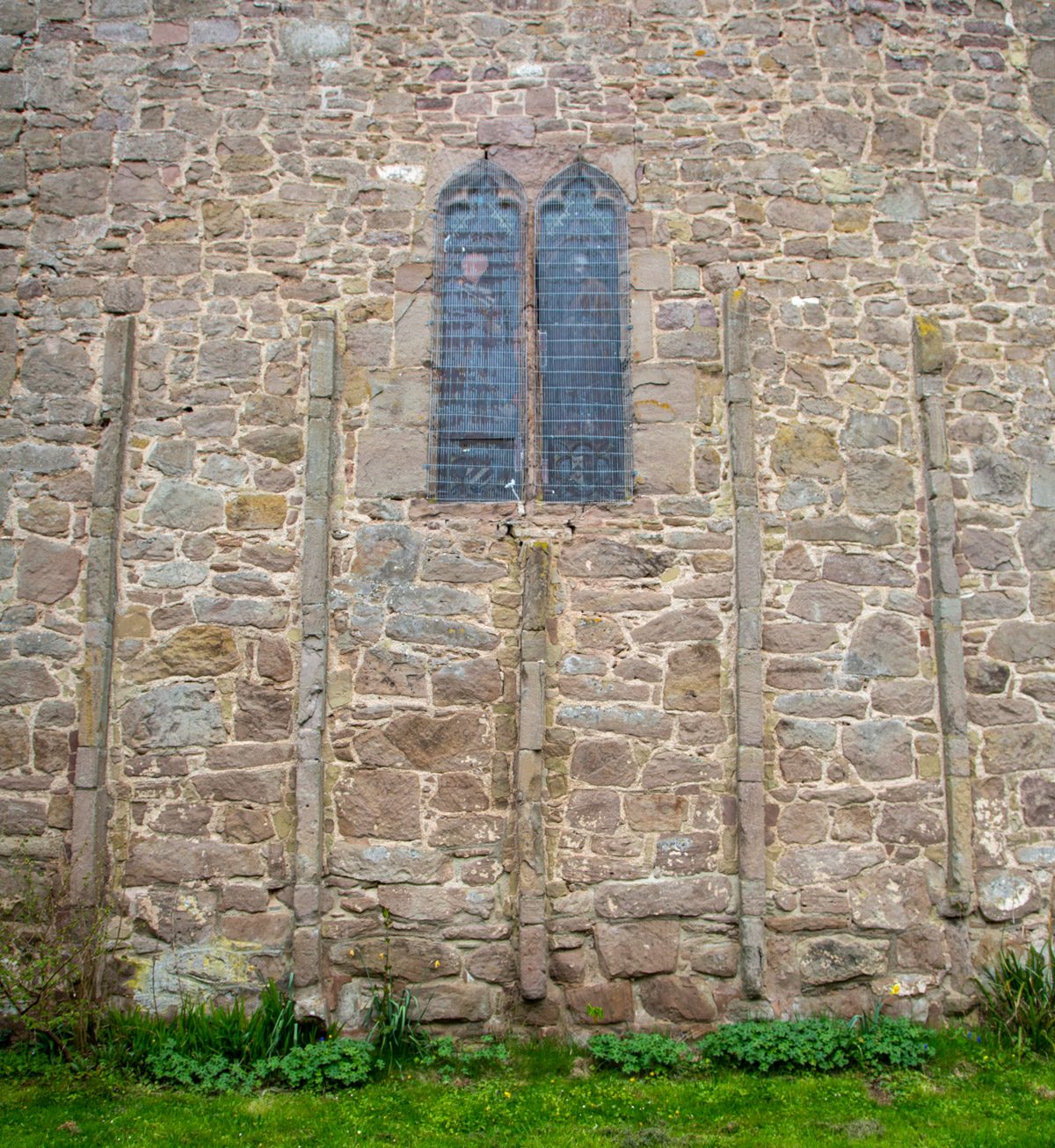 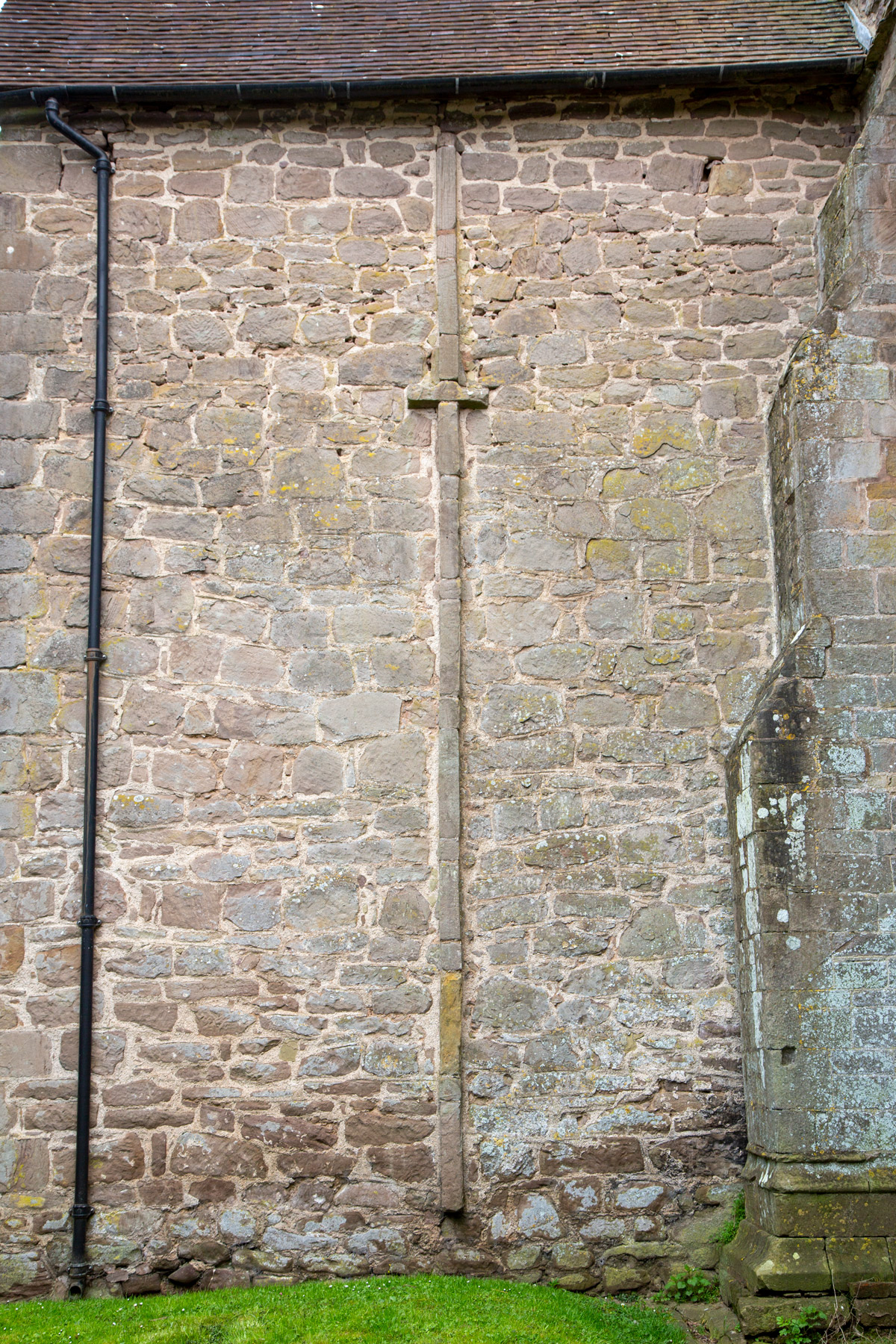 The exceptionally fine original doorway in the N wall of the nave has a characteristic Saxon outer frame moulding, but imposts of Norman type. Similar doors were built as entrances to the N and S Transepts when these were used as separate chapels. 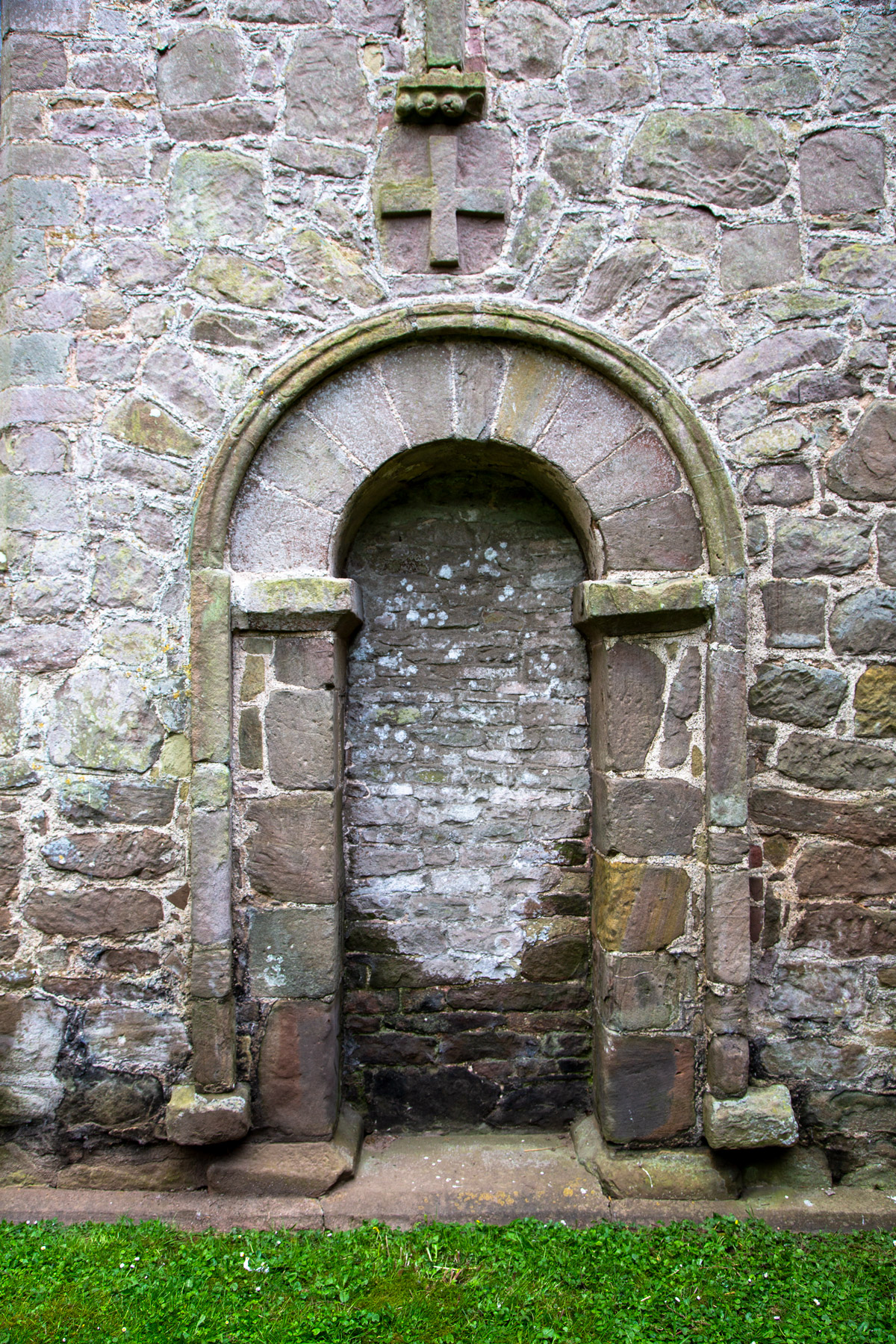 The Chancel has been dated as 13th century, partly because of the angled buttresses with splayed plinths, and the half-round string course.
It is thought to replace an earlier chancel that was shorter, but of similar height to the nave. 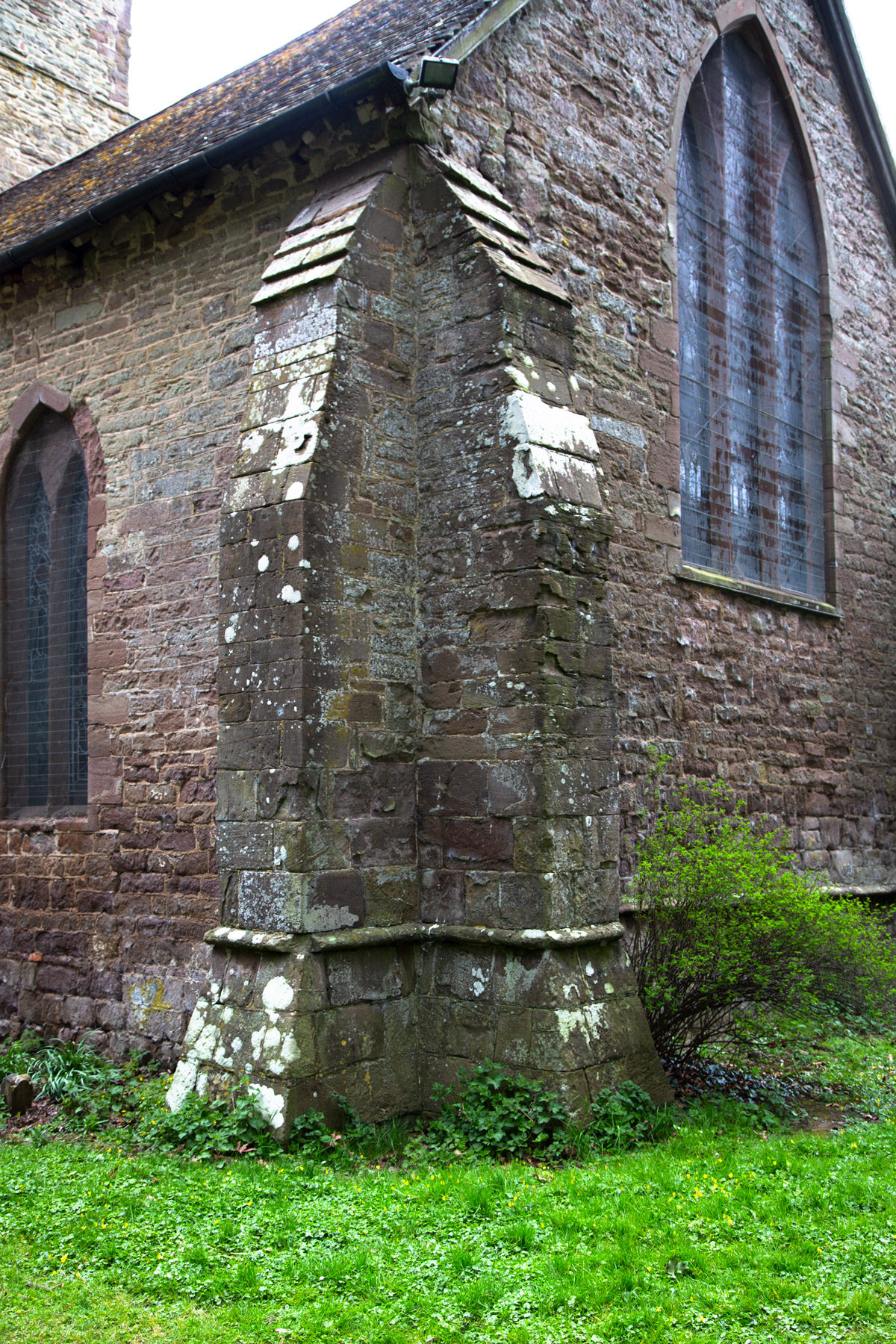 Two Canopied tomb recesses can be seen in the S wall of the Chancel. These contain carved effigies, now completed defaced, but originally mid-14th century.
There is a story that in about 1850 one of the tombs was opened and found to contain a skeleton of great size. It has been suggested that this was Edmund de Mortimer who died, reputedly at Stanton Lacy, in JANUARY 1332.
There is another pair of tomb recesses in the wall of the S Aisle, but without effigies. 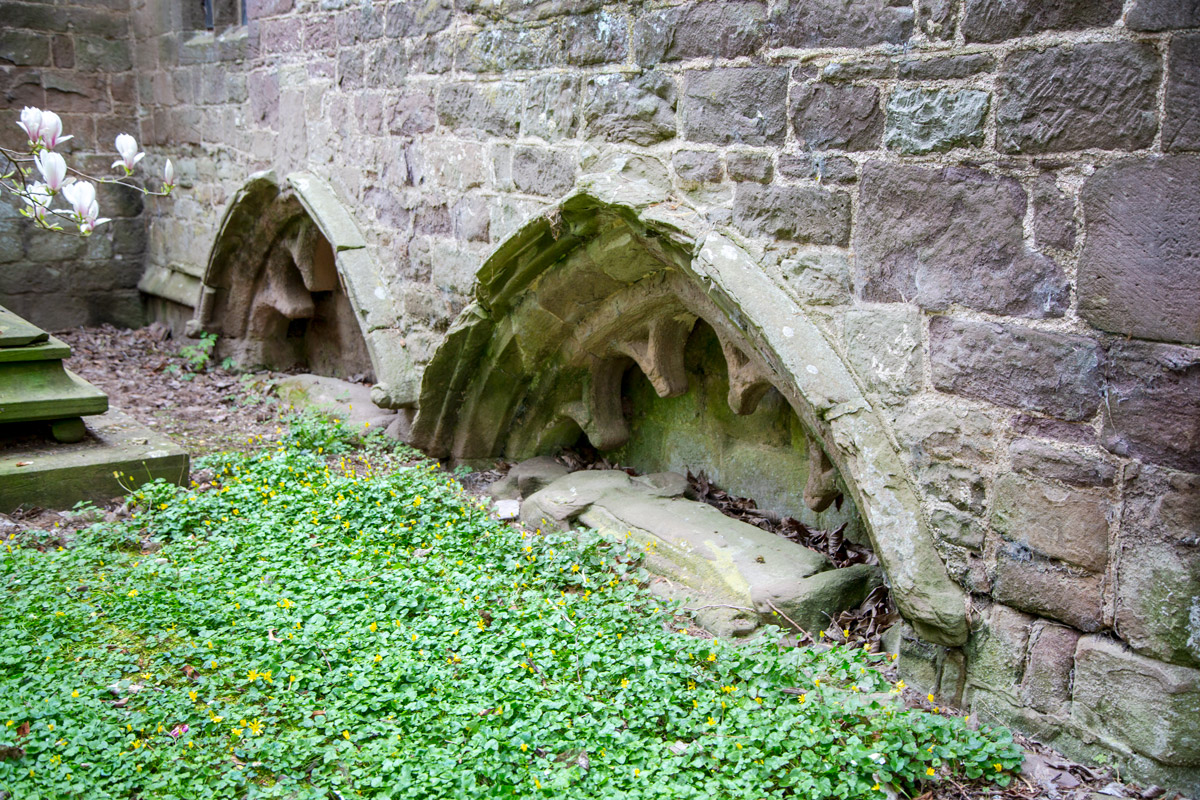 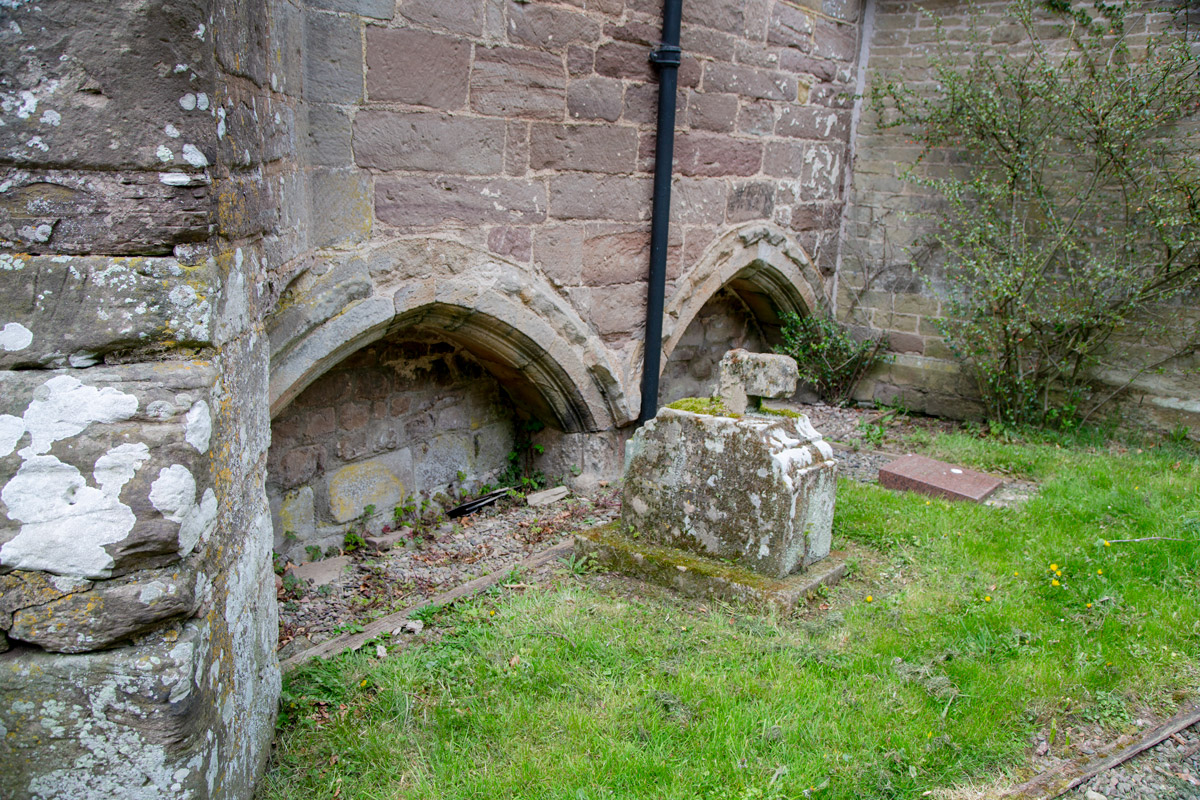 Distinct stonework in the West Wall shows that the S Aisle, together with the nave Arcade were built at a later date than the nave itself. It is dated at about 1320, which suggests that the two canopied tombs to the west of the porch were associated with the construction of the S Aisle. 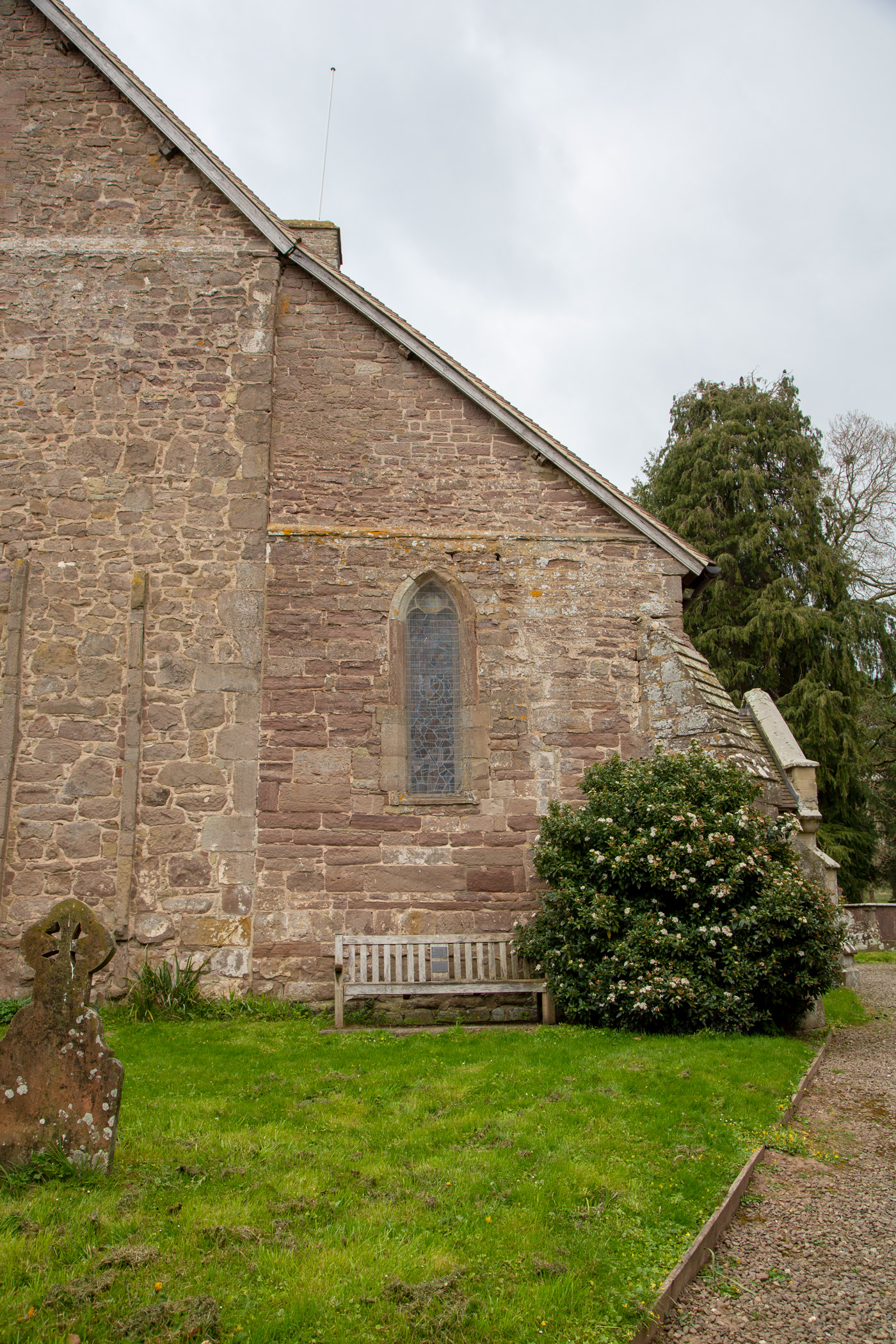 As with the other stained glass, the East Window is by Evans of Shrewsbury. It dates from 1858 and is in memory of Mary Bowles, the then vicar’s mother.
The three panels show Christ flanked by the Virgin Mary and St John.

The window to the south of the altar was placed in memory of the brother and sister of Sir Charles Rouse Boughton Bt, in the 1850s. 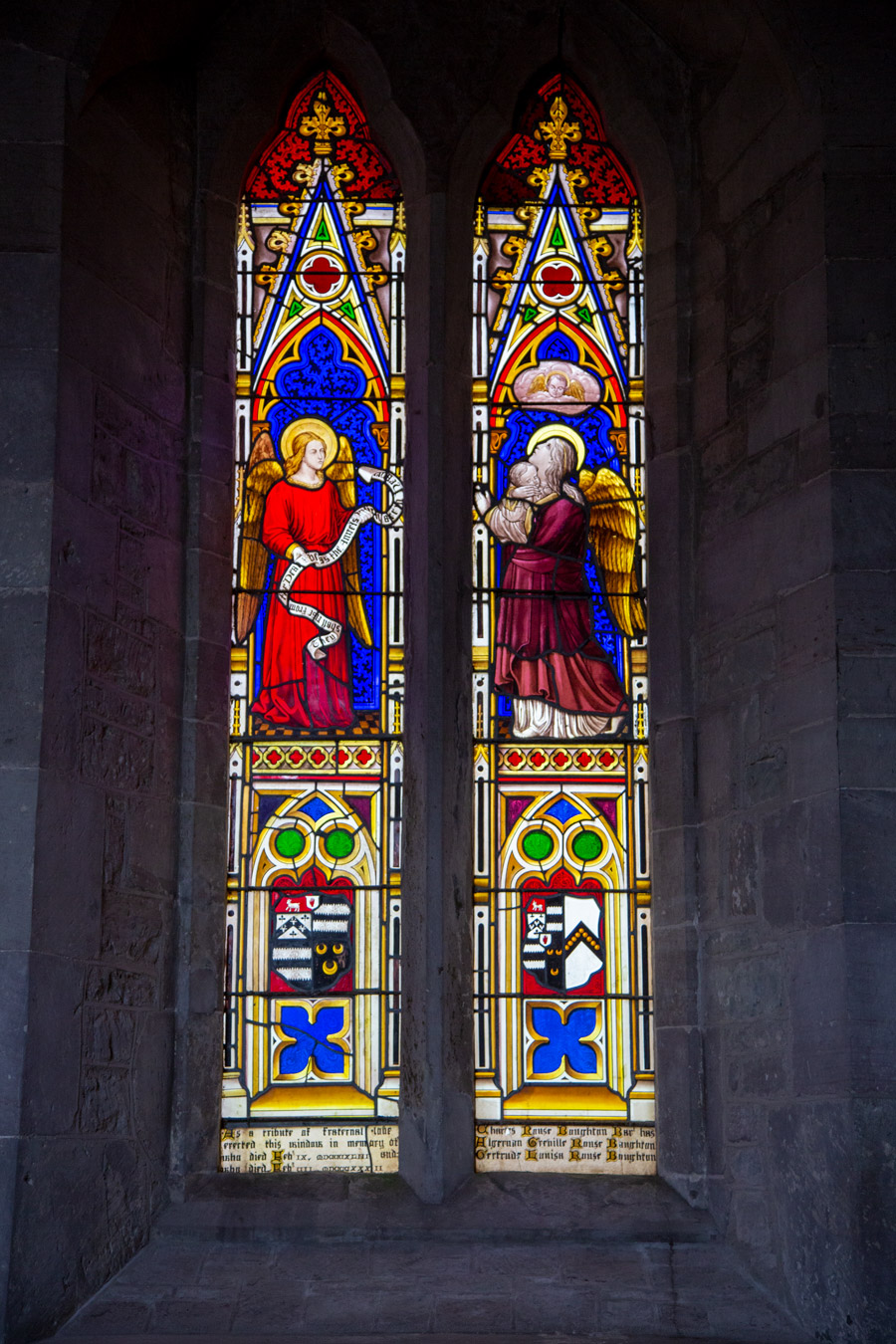 This old triple lancet window now contains the coat of arms of Dr Bowles, vicar from 1847 to 1879.
In earlier years it contained the coats of arms of Roger de Mortimer and Geoffrey de Mortimer. 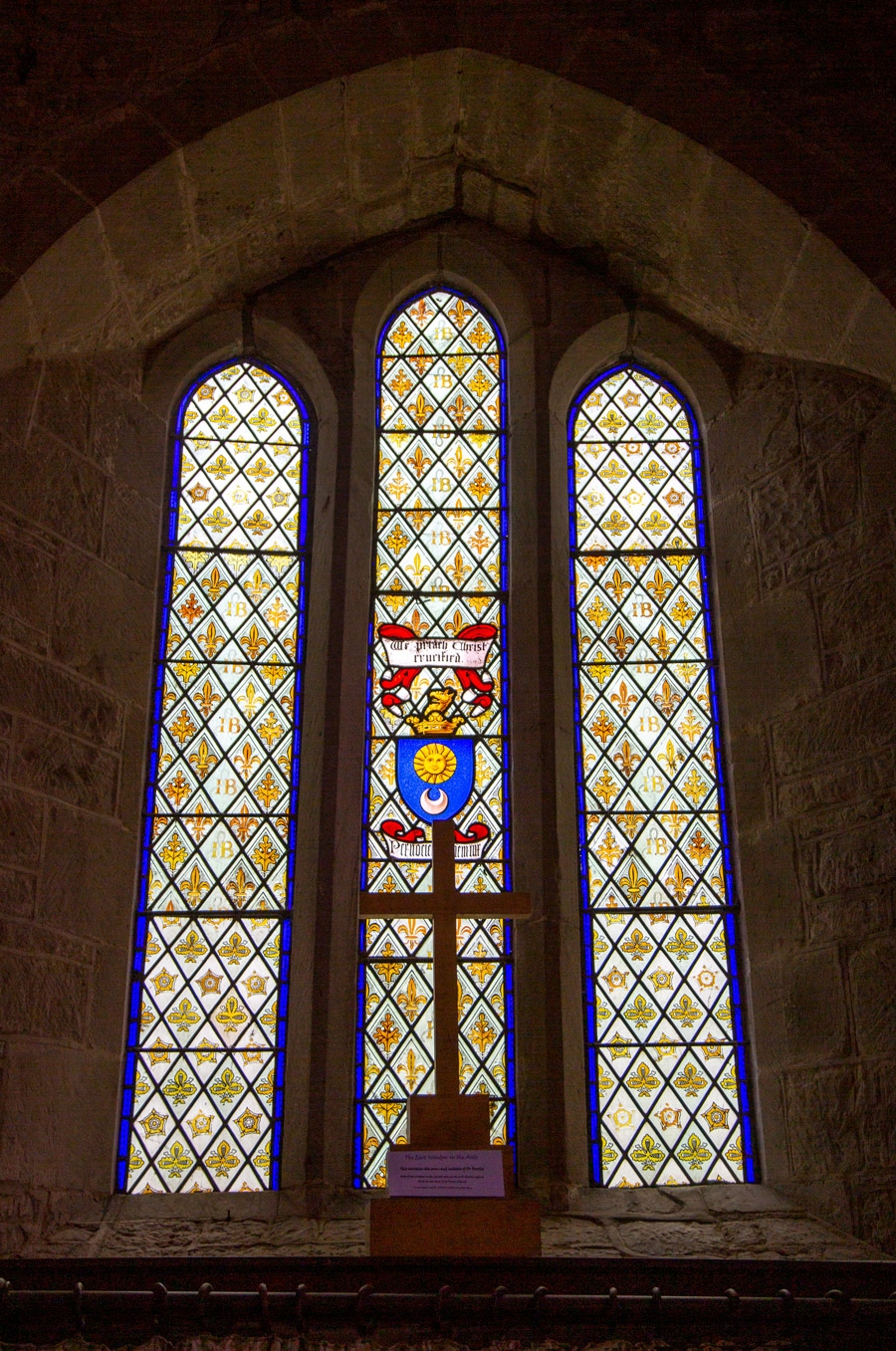 This window commemorates the Hon. Robert Henry Clive of Oakly Park, who died in 1854. The central figure is a portrait. He is flanked by Hope and Charity. 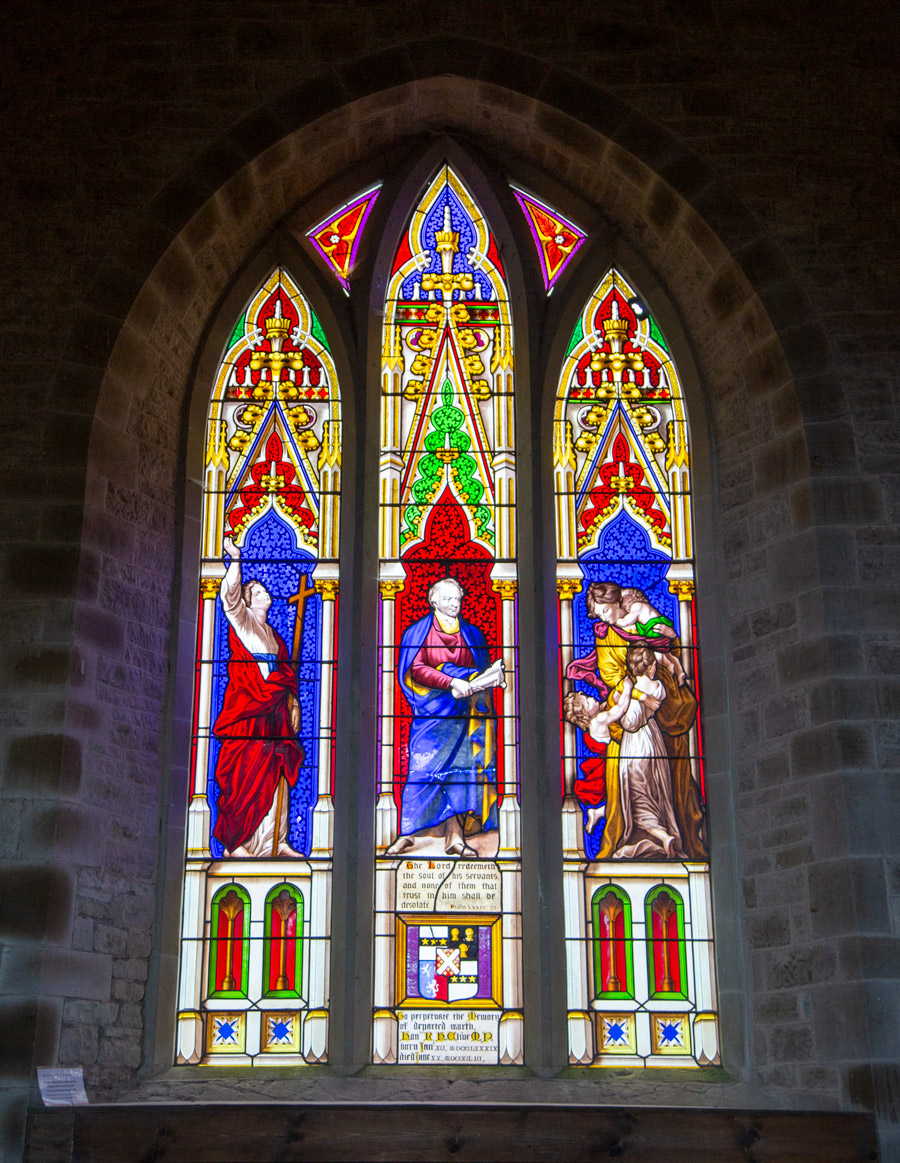 The West Window contains the figures of Saints Peter and Paul. Their faces are taken from life: St Peter, on the left, is represented by the vicar, Dr Bowles; St Paul by the vicar’s friend Dr Clement, a physician and surgeon who was MP for Shrewsbury, 1865-70. 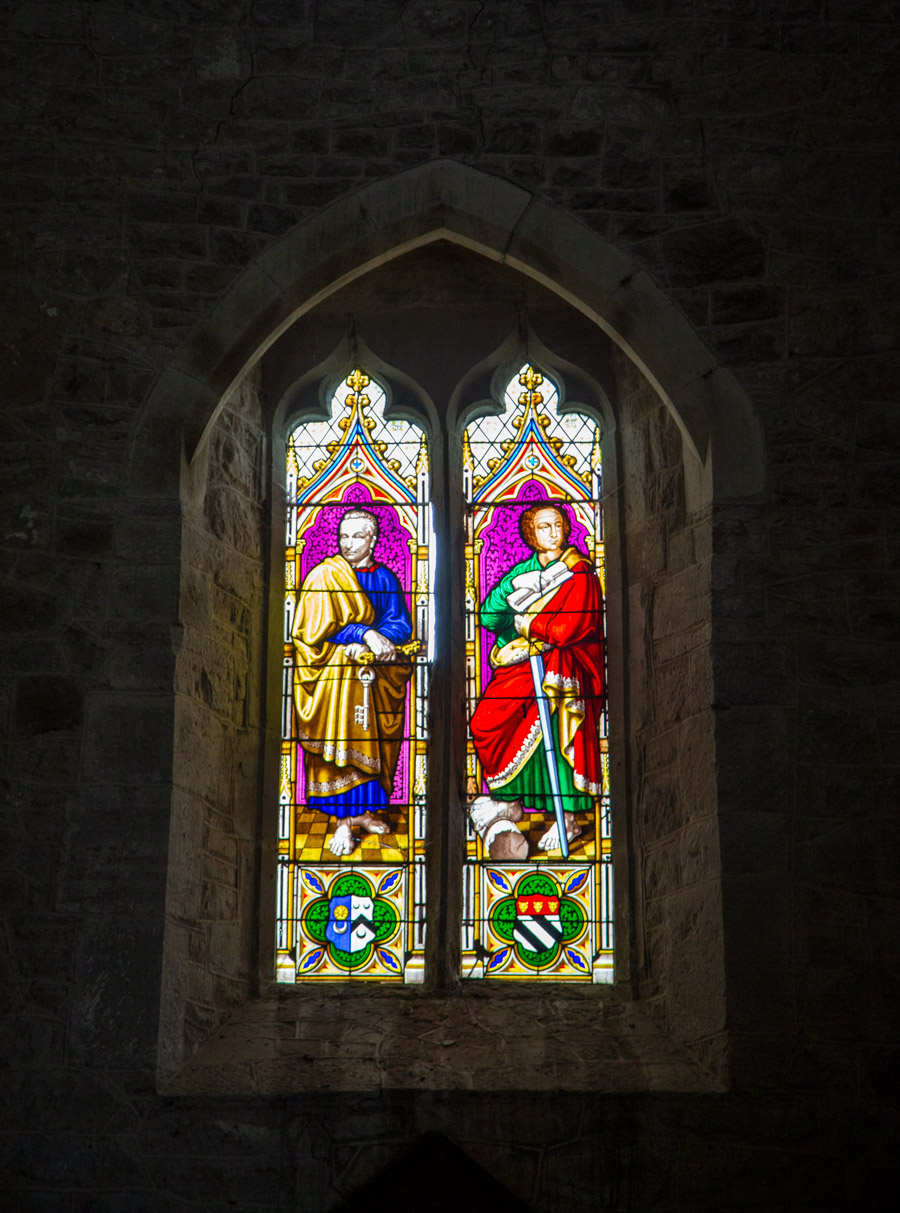 Both the Chancel and the S Aisle contain windows that are made up of glass fragments. They are contemporary with the other stained glass. 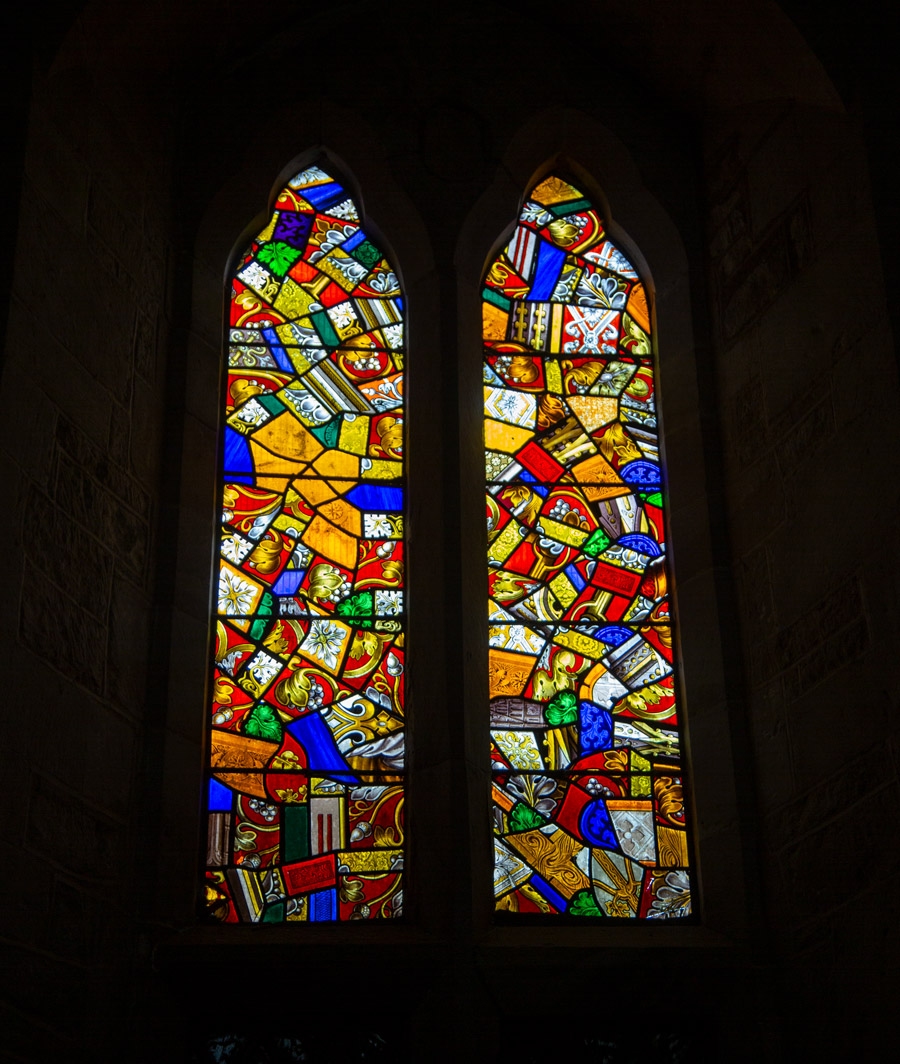 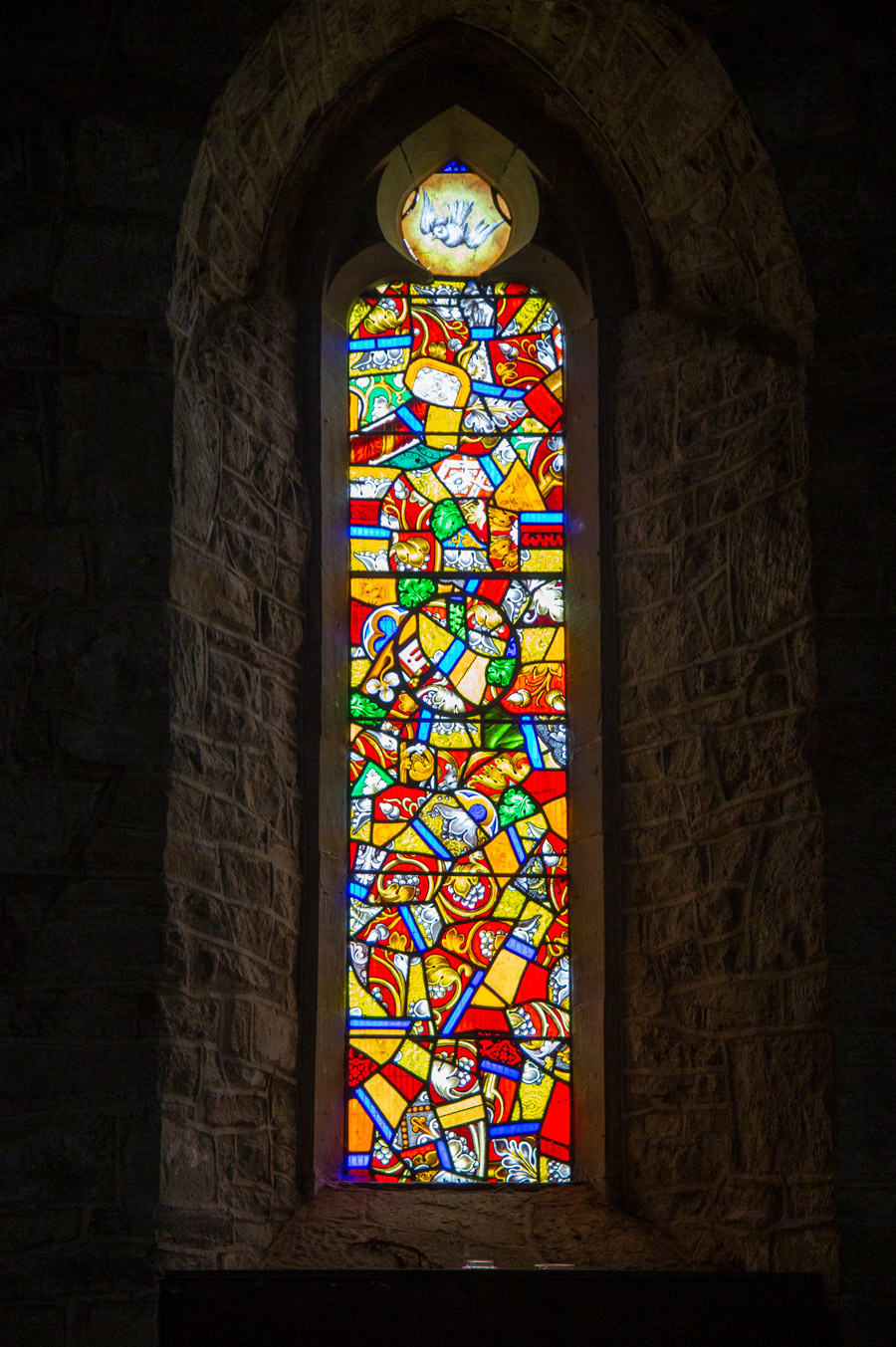 There is a strange feature in the N wall of the nave. It has been suggested that it is an Aumbry, meaning a cupboard in a wall, but these were usually in the Sanctuary where the contained the Sacraments.

The carved oak is thought to be a recent addition. A similar serpent design is found on a Misericord in Worcester Cathedral, dating from c1380. 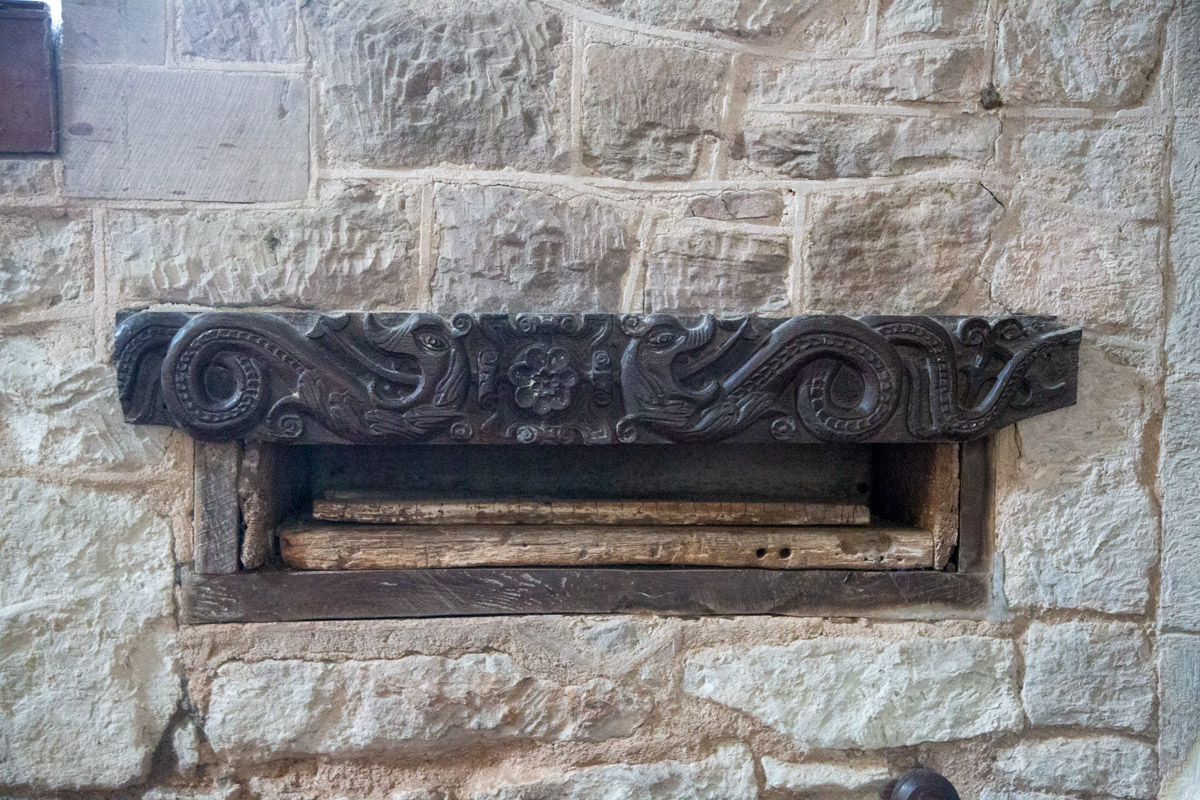 The Organ was built by Gray and Davison of London. As originally supplied, it could be played from a single manual, or automatically from one of three rotating barrels. The barrel mechanism has been removed and a pedal board fitted for an additional rank of stopped diapason pipes.

Installed in 1854, it was moved to its present position in 1889, when new choir stalls were put in. Other than the fitting of an electric blower, the instrument is largely original.

In 2022, the organ was added to the Historic Organ Listing Scheme operated by the British Institute of Organ Studies. It was awarded a Grade II* Certificate, given to particularly important organs of more than special interest. 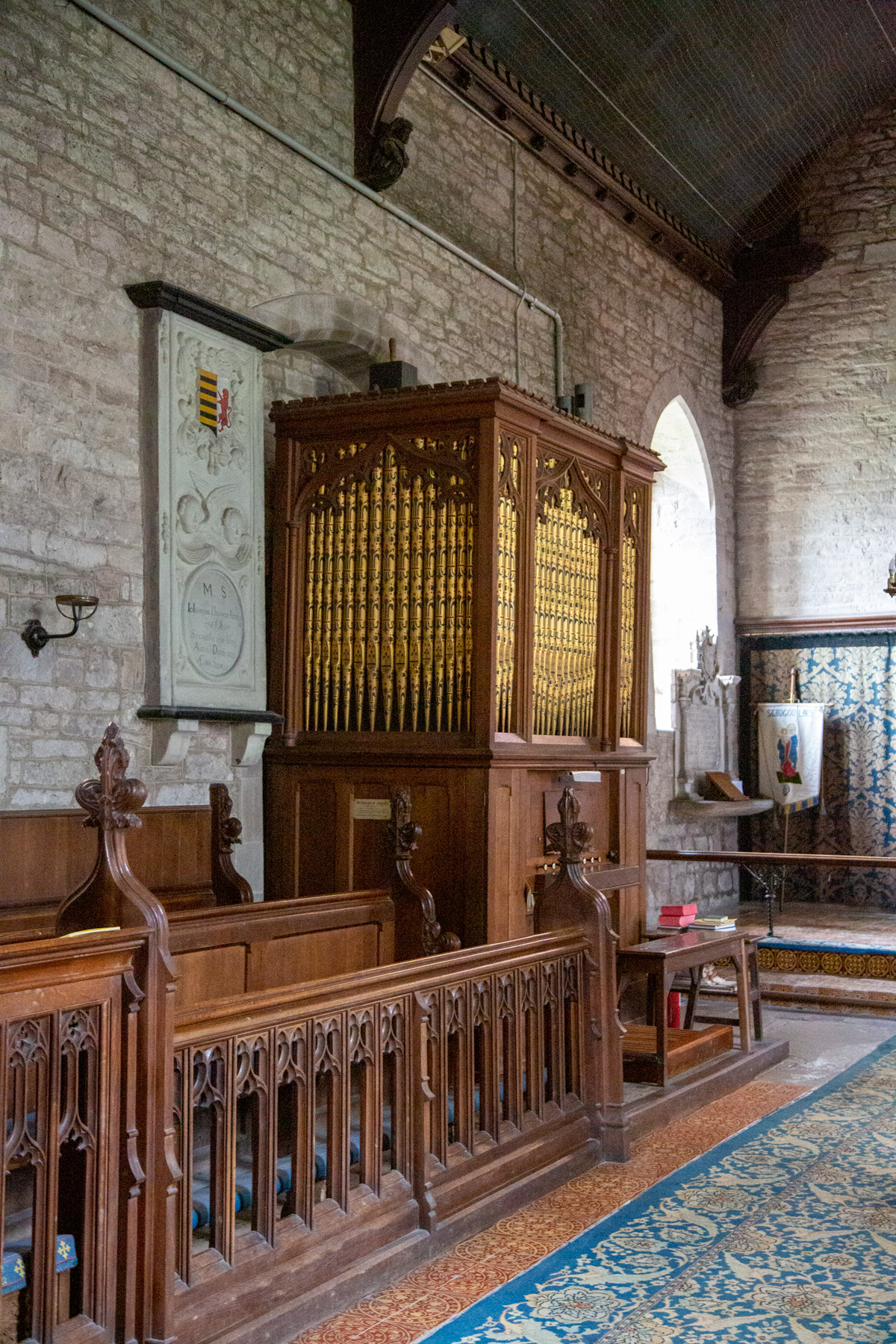 Of Caen stone, and originally unpainted, the Altar and Reredos were installed in 1849. Hildred Harpin painted them in 1930 to a scheme devised by Frederick Etchells. The centre panel contains the figure of Christ, while the other from L to R are Mary Magdalene, St Peter, St Christopher and St Milburgha.
Behind St Peter is the church, and behind St Milburgha is Ludlow town. 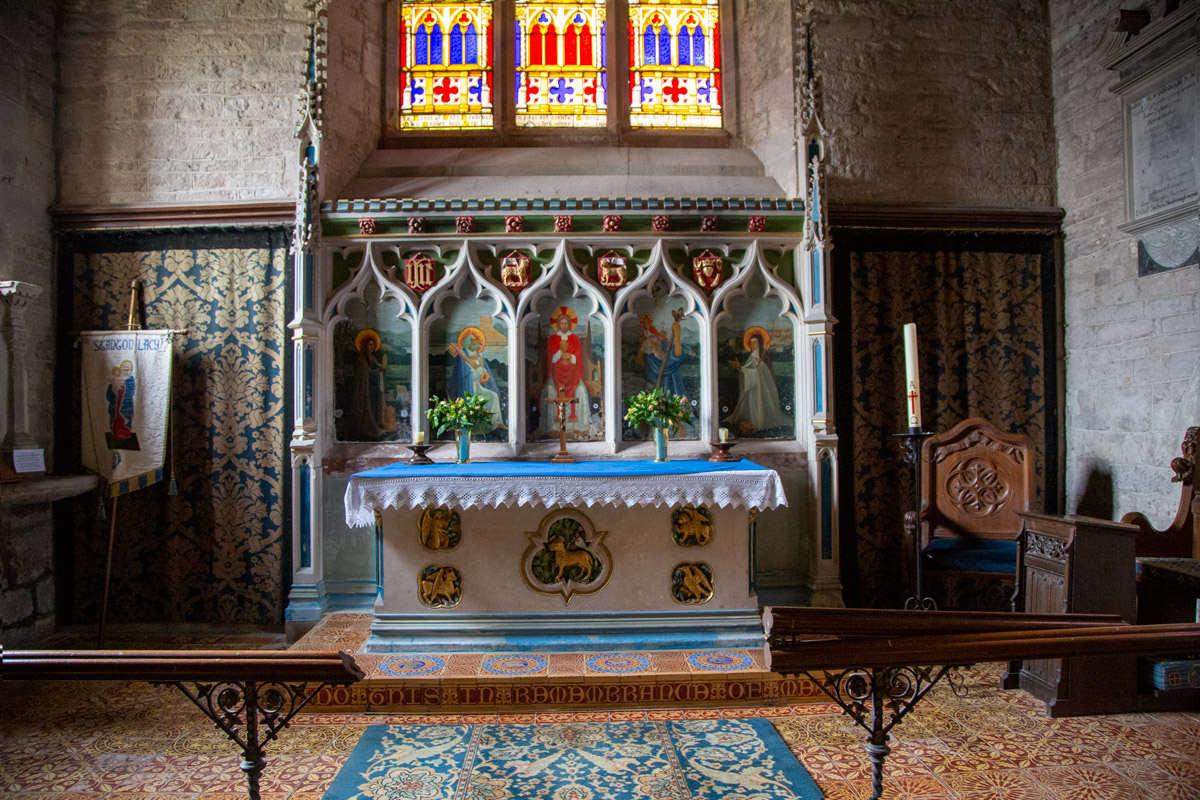 The floor of the Sanctuary is tiled with Encaustic Tiles made at Ironbridge. The designs, by Minton, include the 4 Evangelists (1860) and a Rose Window design (1841-2). 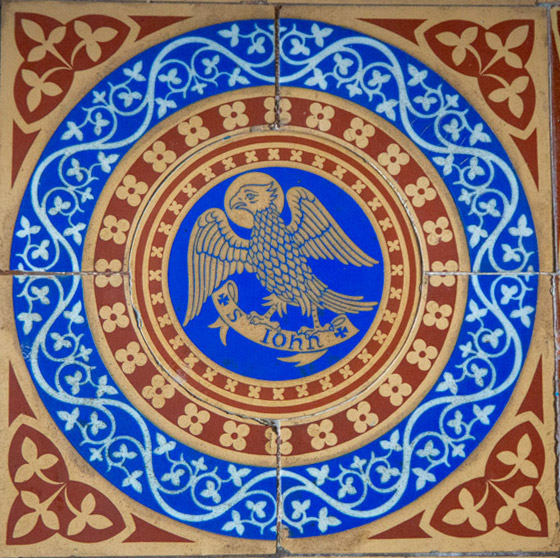 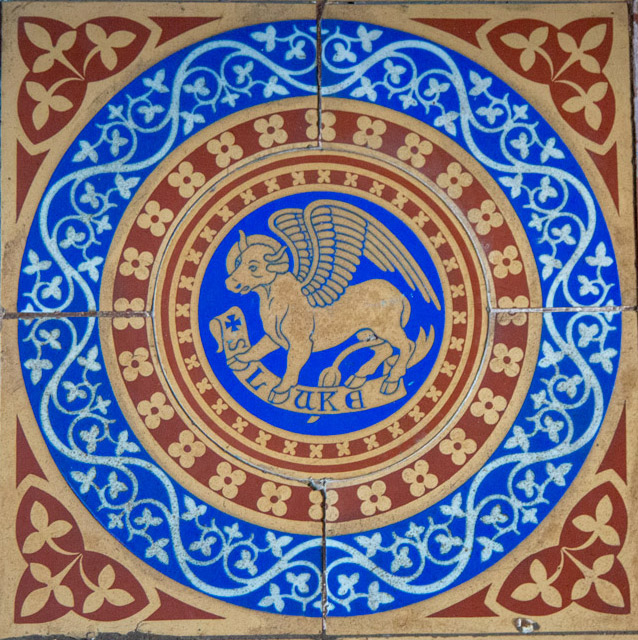 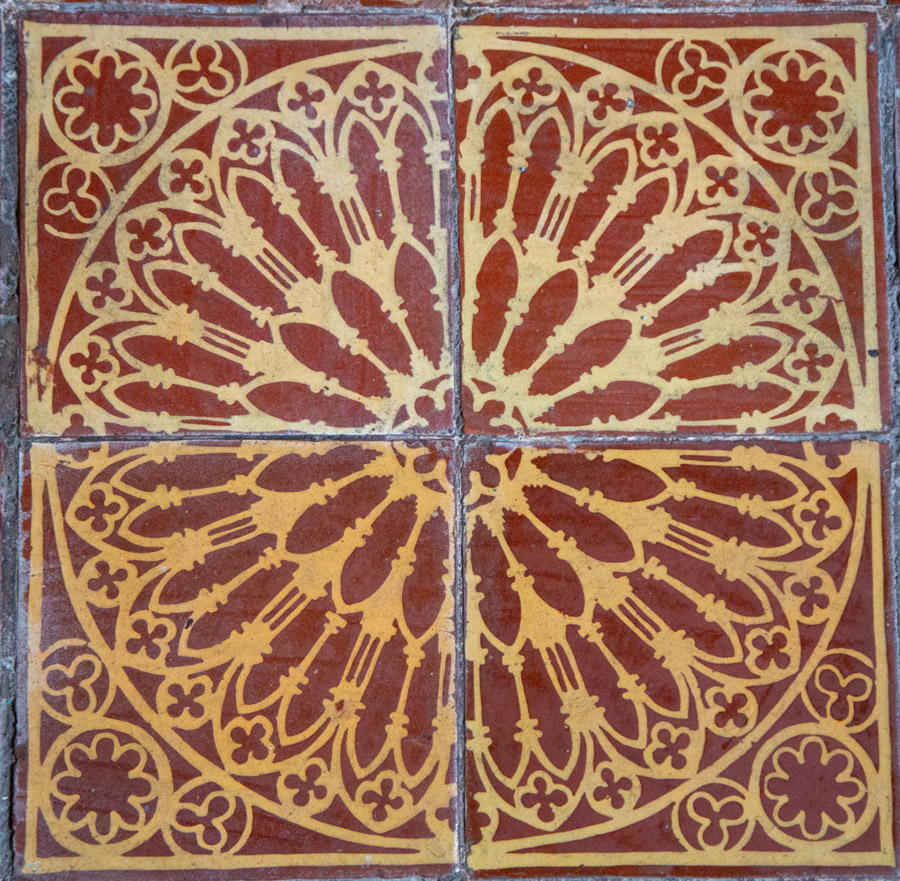 The Parish Chest, in the S Aisle, is typical of its period, and bears the names of Thomas Watson and Richard Garbet, churchwardens in 1668. 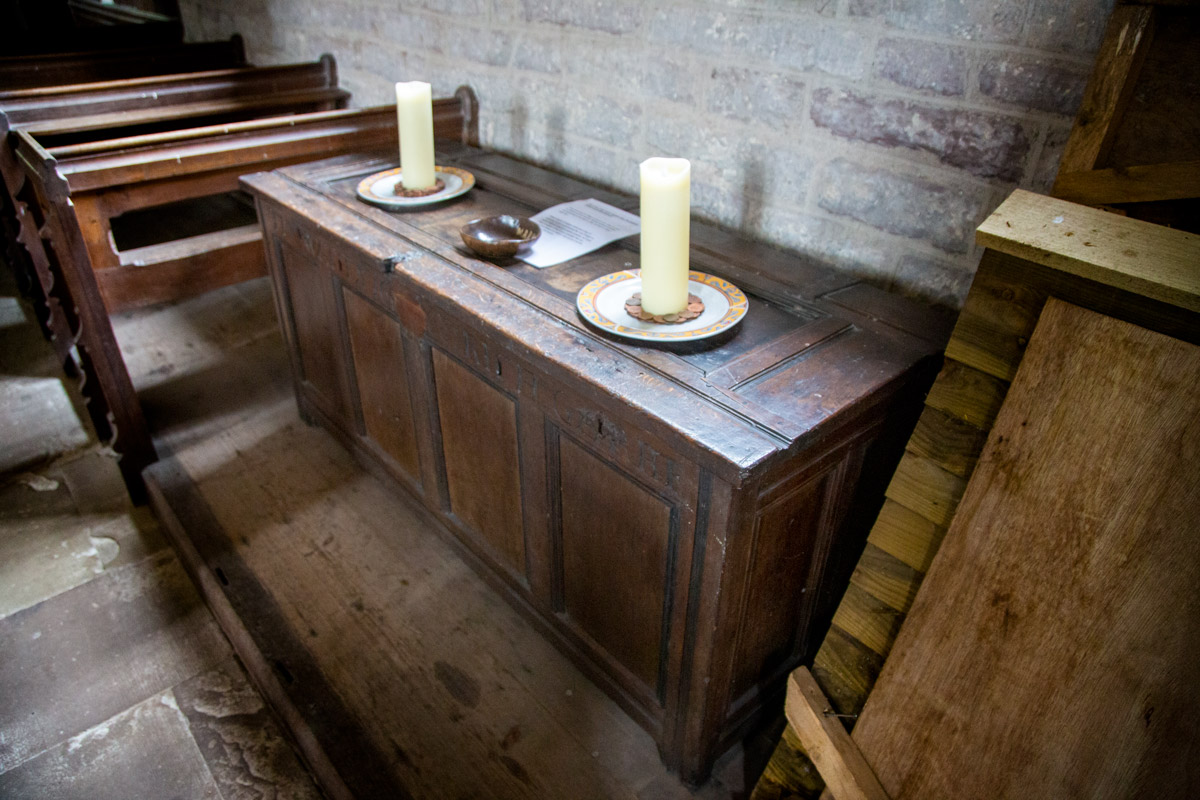 The earliest stonework at St Peter’s, namely the west and north walls of the nave and the north transept, has been dated then to the first half of the 11th century; but visiting archeologists have suggested that the church is at the centre of a much earlier, roughly circular churchyard. It is possible that there was an earlier, wooden structure on the site, one which legend attributes to St Milburga. 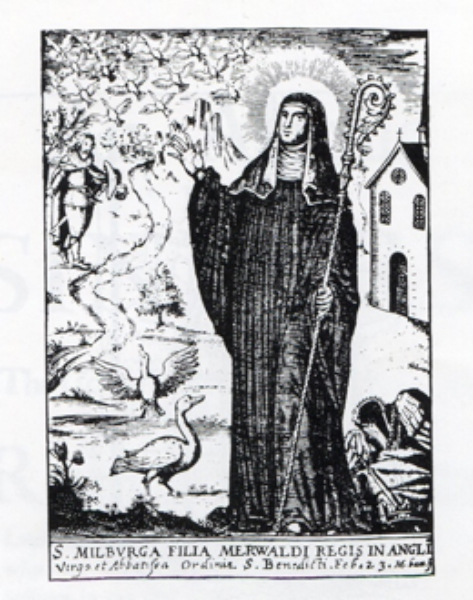 According to the legend, Milburga, the daughter of King Penda of Mercia, founded the church in 680. She was being pursued by a Welsh prince, when she crossed the river Corve close to the present church, and prayed for deliverance.  And deliverance is what she got, because the river level rose very quickly and flooded the adjacent land, blocking the path of her pursuer.  By way of thanks, she is supposed to have founded a church here.

The rapid flooding of the river is by no means rare, which lends some credibility to the story. In addition, St Milburga is associated with the founding of Wenlock Priory, dated to AD 630. We know she was in the area therefore and could be the source of the earlier building on the present site. This would extend the history of St Peter’s by a further 300 years.